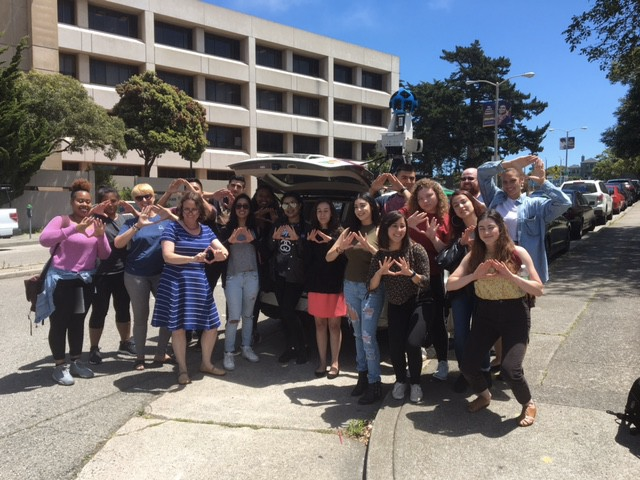 Streetwyze partnered with Google, Aclima, the Environmental Defense Fund, the University of Texas Austin, and other partners on a state-of-the-art project which combined local data with big environmental air quality data in an effort to better understand the relationship between air quality and asthma with low-income communities and communities of color. Streetwyze was the lead agency in collecting local and experiential data on air-quality. Google provided Street View cars that were outfitted with Aclima’s cutting edge air quality sensors to capture “hotspots” and “cool spots” for poor air quality across Oakland. The big pollution data, however, could not tell us why pollution hotspots exist, or if there were sensitive receptors (i.e., schools, daycare, elder facilities, etc.) situated close to hotspots that were actively being used, how they were being used, by whom, and at what time of the day? To address these challenges, we were asked to do a Streetwyze geospatial analysis (SWAG) and “Ground-Truthing” of Google and Aclima’s data. Our SWAG identified previously unknown sources of Black carbon emissions, which contribute to respiratory and cardiovascular disease, cancer, and even birth defects, as well as critical sensitive receptors in the community. Armed with this new layer of environmental intelligence, community-members could better understand and protect themselves from poor air quality in the places that matter most to them. Additionally, this data was used to inform health, transportation, and city planning policy and practice. The innovative project has received local and national attention and was published in Environmental Science & Technology as well as the Aclima blog found here: https://www.aclima.io/blog/the-community-becomes-the-classroom-544f7f51f2c5